The Wii U game console was fairly unpopular compared to other recent Nintendo consoles. Because of this, there was only one multi-platform fishing game created for the system. The Wii U version of Rapala Pro Bass fishing was pretty good compared to others. It was on par graphically with the PS3 and Xbox 360 versions. The problem with the Wii U version seems to be the gimmicky controls if using the touch screen. A lot of slides and unnecessary movements that dabbed down the fun for some. It’s kind of sad considering the original Wii had tons of fishing games to choose from. Not all of them were A+ games but they had a good variety. Not the best system to own if you are looking for a lot of good fishing games to play. At least this one is high quality and fun to play. 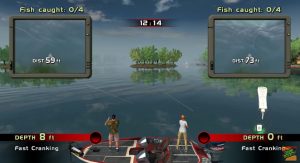