There was only one retail fishing game made for the Atari 2600. Fishing Derby developed and published by Activision. Has to be one of the first fishing games ever made. It was a simple catch fish score game. Play as one of two anglers fishing from docks. Try to catch the most fish for the highest score to win the match. Fish caught from the bottom are worth more points. It was a blast to play against a friend back in the day. It’s still a fun one to play if you feel like killing some time. 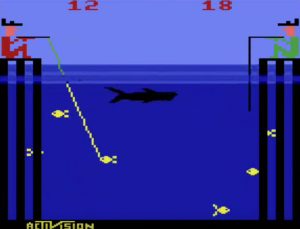