I really wish Playstation 4 (PS4) had an abundant amount of exclusive fishing games. The PS1 and PS2 consoles had so many. It was hard to keep track of them all. As of right now PS4 has one multi-platform fishing game released for it. Dovetail Games Euro Fishing was just released for the system in April of 2017 (2 weeks before this website was created). I am glad that the system finally has one fishing game at least. I am hoping Playstation 1 and 2 follow ups or remakes are released. How about Fisherman’s Challenge, Fisherman’s Bait, Reel fishing or a new Rapala game? So many classic exclusive titles that can be remade. If a great developer utilized the power of current generation consoles. I think good games could be created. I know these sorts of games are not as popular these days. They don’t sell nearly as well as they used to. PS4’s market is wide open though. Why not create a few to fill the small demand at least? 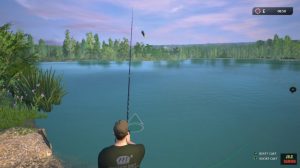